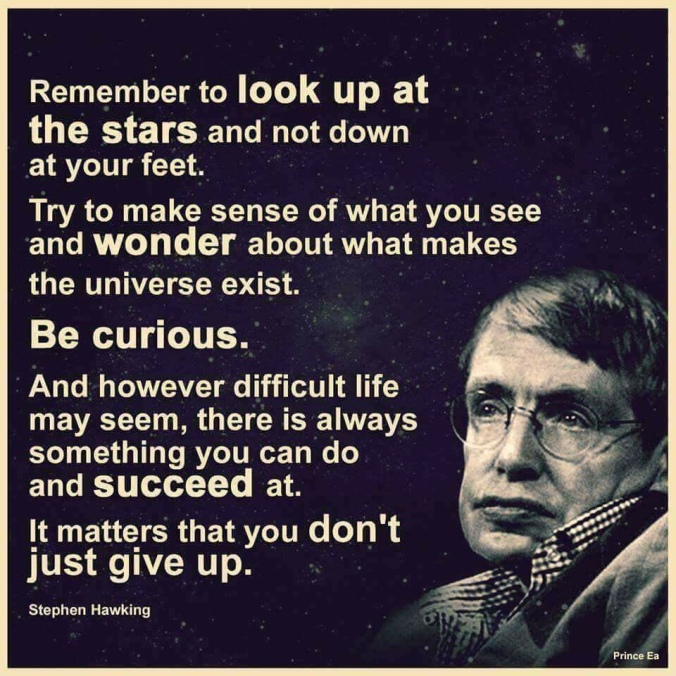 I want to share something that I’ve carried with me since I was a child. Something I’ve been giving a lot of thought to over the last month or so. Something that when I saw the above quote for the first time I nearly cried. The first time I saw this quote was on March 14th, 2018, the day the world lost the greatest mind of our time. One of my biggest regrets is that I will never seem him lecturing at The Perimeter Institute. This amazing research place is not far from my home and Dr. Hawking has visited several times and allowed his name to be used for one of the buildings. He was an extraordinary human who’s ability to see the world in a way no one else does is something I admire, I admire the legacy that he leaves for us to preserve.

The start of the above quote is something I feel is easy to think but hard to master. I was out a month or so ago with my friend Amanda, we were at Chapters doing our thing and we left (as one does), about a day or so later my friend Krissy texts me to let me know that her Boyfriend Brian’s parents had seen me. I’ve met his father but I honestly don’t recall seeing him there which isn’t a surprise to me, I’m horrible with remembering people, names, and their association to me. Her text pretty much relayed the message from his father that read “…smarten up and look up” after I responded it’s a bad habit fro childhood she responded with “…you don’t look up often, even Brian said that”. She’s 100% right I never realized that other people took notice.

There are two main reasons why I’m perpetually looking down, one practical the other truly is carried from childhood and has stuck with me.

First let’s talk about the practical reason; I’m clumsy and at risk of just falling over at any time. Have shitty eye sight and horrible hearing/balance makes navigating my surroundings a challenge. Any changes in texture of the ground I’m walking on, any chances there is debris laying around, or any chance for uneven surface gives way to anxious footsteps. I get around a lot on my own and I’d rather not take a fall in public so I tend to keep my eyes down to ensure I don’t take a misstep. When I’m with my sister I rely a lot on her and tend to grab her arm for safety but I can’t take her everywhere I go so I just look down and hope for the best.

And secondly the one I’m sure I’ve talked about before is one I’ve carried with me since childhood and probably plays more of a role then I’d care to admit. <takes deep breath before writing> before I continue I feel it’s important to note that I’m not trying to throw my mom under a bus here, I love her and although I wish she had handled things differently I know she did the best she could given her upbringing. With that said when we used to go out in public and there would be people walking in the opposite direction sharing the same sidewalk she would instruct me to get behind her and keep my head down. This would happen when we were walking, if we were out shopping, pretty much any time we were out in public. I know this wasn’t done because my mom was ashamed with the way I looked but instead was done because she didn’t want me to have to deal with assholes who would point, stare, laugh, and make comments, it got to the point where she didn’t need to utter the words, it became what I did to shield myself from the cruelty of others, something I still do to this day. Because hiding is a lot easier than having my shield bombarded, it’s thinned out as the years have gone by, truly doesn’t take much for it to fail. Unlike my favourite Sci-Fi shows there is no recharging this shield so I preserve it as much as I can.

The conversation I had with Krissy has been stuck in my head since we had it and I’ve tried hard to be better at looking up, making eye contact with people but I’ve not mastered that yet, not sure I ever will. But like Dr. Hawking says “….it matters that you don’t just give up”