I’ve previously discussed my condition(s) their names and what about me is physically different but today I wanted to talk a bit more about how much I can see and hear as well as something I haven’t really publicized.

First, let’s talk about my eye sight (or lack there of). I don’t know the actual visual acuity I have but my next visit to my ophthalmologist I do mean to ask her. Growing up I saw some eye doctors at sick kids but my vision never seemed to be important. One of the known identifiers of one of my conditions is that I do have a dermoid cyst on my right eyeball. Sadly that’s my “good eye” so that kind of sucks. This cyst doesn’t impede my vision but the type of Cyst that it is can have any number of things grow from it. In the last year mine has suddenly decided it wants to grow hair so every month to every 3 months I have to go and get this hair plucked. It’s as painful as you are imagining even after she throws in some freezing drops. It’s better than the painful hair in the eye feeling which is what I have to deal with until I get in to get it plucked. Aside from the cyst I also have Photophobia which essentially (if you didn’t click that link) is my eyes are stupid light sensitive. If I go out when it’s sunny my left eye auto closes and I squint with my right. I have prescription sunglasses which help, they are as dark as they are legally allowed to be. Which isn’t dark enough for me but it does help. In winter I will suffer from snow blindness which makes living in Canada fun! I enjoy dark environments as artificial lights also bother me. I’m lucky at work that my workspace can be in a lowlight area. Even at home I tend to not turn on the bathroom light or any light when I get up early as I can see better in low/no light. Street lights and oncoming car lights when I’m a passenger also really are hard for me to deal with. I also suffer from a condition called Nystagmus this isn’t something that is common with the condition(s) I was born with and I’m unsure how long I’ve had this but I suspect it’s been since I was an infant. Most people with this condition can’t tell that their eyes are moving and for the most part on a day by day basis I can’t either unless I’m actively trying to stare at something than I can feel that my eyes are moving. When I’m exhausted or my eyes are stained sometimes they stop moving at which point I tend not to be able to see anything much at all and it’s time for bed! My eyeballs are also misshapen and the surface of my eyeballs resembles that of a golf ball. I need to put eye drops in frequently as when I blink I don’t lubricate my eyes as well as others. When I was younger I never blinked and actually slept with my eyes open, I’m happy to report this is no longer the case!

With my left eye I don’t see much, when I go for an eye exam I can’t even see that giant “E”it appears as a black blob. If I know you I can generally tell who you are by your overall shape but if I were to meet you for the first time it would take my left eye a while to see you. I can see most big objects, I can see colour and light but mostly everything is horribly out of focus and fuzzy. I’m legally blind in my left eye.

With my right I can see ok, things are in focus when I wear my glasses but I can’t see fine detail and the font size I’m comfortable with is big boarder in on huge. I can’t see street signs unless I’m right on top of them and if it’s sunny out I can miss big things like cars. If I’m with a friend or my sister I tend to have them guide me when out in a parking lot during the day or if we are going over uneven ground as I can’t tell if I. About to step somewhere dangerous. My sister reads all the labels I need to read, and my friends read me the menus at fast food joints because I can’t see them and sometimes even dinner menus. As I get older my vision loss will become a real issue and I will consider getting a guide dog. I wish I had had one the other night walking home from the bus stop a ways from my house because I had the hardest time navigating the sidewalk and ended up taking a cab home the next night. 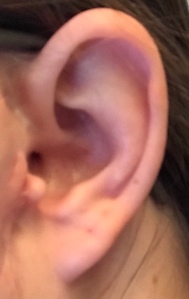 I’m deaf in my left ear. I wasn’t always, before I was 16 I had some hearing however after I was home and pretty much recovered from my jaw reconstruction me and my family noticed I wasn’t all that stable on my feet. I was always considered to be clumsy but this was way more than that. The turning point to me that something was wrong was one morning getting up from the dining room. Table after eating cereal I wanted to make a hard right to head to the kitchen which was behind me. I had sat with my back to the kitchen. Instead of right my body kind of went straight and to the left, I fell, broke the bowl and broke an ornamental big ass elephant thing my mom really loved. My mom made an appointment with sick kids where they did a hearing test, at first they thought maybe there was some wax build up. So after having wax vacuumed out of both ears they ran the hearing test a second time. Let’s just say they didn’t like the results the second time around and they decided exploratory surgery was required to find the answers. Not sure how long between the test and the surgery but they did go in and found that the bone graft they had put in months ago had pinched the ear canal shut thus rendering me deaf in the left ear. No hearing aid was going to fix that so I had to cope with that and fall a few more times. To this day I still kind of fall over. I have moderate hearing loss in my right ear but I’m not deaf. As someone who is hearing impaired I don’t do well in crowds or noisy places. If I’m walking with someone I will automatically walk on their left so that I can hold a conversation. In groups I tend to just shut down and not participate because I can’t hear 90% of what’s going on. My sister again is awesome and even though I think she is lying she says she never gets mad if I ask her to repeat herself 6 times (think that’s my record). I will also agree to shit I didn’t actually hear simply because I don’t want to feel like an ass for asking someone to repeat themselves. My sister warns me that one day I will end up agreeing to something I regret, I say probably but I will deal with that. To be honest as long as I can still hear music through my headphones I’m ok with my hearing loss. I don’t honestly know how you all deal with such a noisy world!

Something that I also have to live/deal with is a brain tumour now this sounds scarier that thankfully it is. In 2012 I went to my ENT specialist with some annoying symptoms. He noticed my nystagmus and asked if this was congenial. Not knowing he decided to order a CT scan and an MRI. I went back after CT results and that’s when he told me that there was something to be worried about but that he had made a referral to a neurologist. Nothing like the words “brain tumour”to wake you up. I had gone to that appointment like to all of my appointments by myself. Probably a week or less later I was fighting a nasty cold and I had stayed home from work, I was in bed when my mom comes in my room to tell me there is a phone call from a doctor. I didn’t think much of it but I answered, the lady on the other end said she was calling from the neurologist office and was telling me my appointment to meet the neurologist was the next day. I really got scared, usually if you get an appointment that easily something is horrible wrong even though with other specialists I was also pretty lucky and never had to wait long. So I called my boss to report that I was going to miss a second day of work. I went and he confirmed that I did have a tumour but he didn’t think it was cancerous but that we’d have to wait for the results of the MRI that was scheduled for the week after. After all of that I learned I have a benign Lipoma tumour situated in my corpus callosum. I have regular MRIs and visits with my amazing neurologist. These types of tumours can grow but mine seems to be stable at 3cm x 1cm and it won’t be removed unless it does grow.

Link to my Vlog