After a good day at work it’s nice to have some downtime with a friend, kick back, and have fun. Today starts a busy week for me whereby I’m out doing something neat after work most days. Tonight I headed out with my friend Marnie to do Social Art KW. I’ve written about this before but here is a refresher for those new to my blog or who just plum forgot!

A group of upwards of 30 people all converge at a local pub or restaurant with nothing and come out with a work of art that they are happy with, or at least tolerate! My first one was a fall scene I took myself out on my birthday and this is where I first reconnected with Marnie. We have worked together in the same building for years but hadn’t had the chance to hang out. I was a little (ok a lot) worried about my first time at this event but was excited. I was sad that no one was able to come with me but determined to have a good time. Marnie noticed me first, approached me and welcomed me to sit with her and we ordered food before things got under way. I’m forever grateful for her for doing that because I doubt I would have spoken with anyone, I would have kept to myself, did my painting and bused home. Instead I ended up really connecting with her, had a great time and painted a scene I could tolerate. It’s currently hiding but here is a picture:

My first ever attempt

My second time going was as a private party that was hosted with a former co-worker and friend Lisa. She had really wanted to go to an event but none of the dates worked with her schedule so she made a private party and we painted an owl, It’s still growing on me but at least it’s hanging up in the dining room!

That brings us to tonight’s outing, which was much like the first. Marnie and I went together and it was hosted at Fionn MacCool’s in Kitchener near where SportsWorld used to be. It’s my first time there and I liked it. I couldn’t eat much as I’m still recovering from that torture of a tooth removal so I tried their Latke Grilled Cheese which I was only able to really eat the centers and the pickles on top, I also tried their Apple Crumble Pie, they don’t dice the apples they have them slicked which meant when they cook with the skins it makes them a bit tough to eat so sadly most of this went untouched as well. Have to say the coffee was great!

We started painting at about 6:30pm and I got home about 9:15pm, so it was a pretty good evening event. Rachel is really great at walking you through each step, and when you get behind or need extra help she is always there to lend a hand. Just don’t ask her to actually put paint to canvas on yours because she won’t..this is not a bad thing, as it is meant to be your work of art. Being this was my third one I really didn’t want to rush so I found myself quite behind everyone else. I was working on my background and hills while everyone had just about finished the windmill. I took great care to ensure that the background and the ground were blended nicely as I found that with my first one I didn’t do this well. The windmill posed lots of challenges with the lines, filling in, and the blades. If I had to pick a favourite element from today’s painting I would say my background and my grass. If I had to pick something I could change it would be the hills and the blades of the windmill. 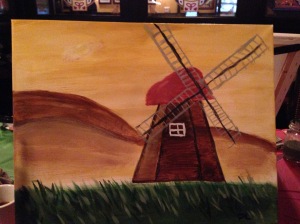 If you live in the area or are coming to KW for a visit please check Social Art KW’s webpage (http://www.socialart.ca/) for upcoming dates because it’s well worth the $30, I love seeing how everyone’s turn out, and I try very hard not to compare mine to everyone else’s because I always feel that mine doesn’t stack up. 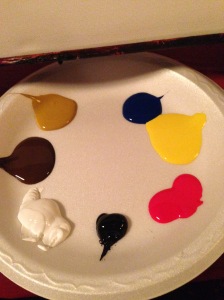 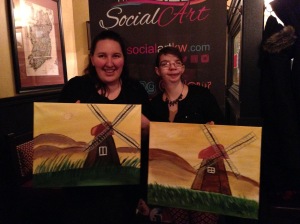