I thought i would share my top 10 favourite movies of all time. I have more favourites and may add to this list or make a new one that would be my top 20 but here is the start. Next top 10 list will be about TV shows and that will be significantly harder to choose from.

These are in order from oldest to newest because I don’t have a number one favourite I love them all equally.

As a kid from the 80’s having this movie come out was one of the best things ever. I was too young to see it in theaters but we had the VHS and we watched it a lot. There is so much going on in this movie, the humour is not over the top, the writing is just fantastic. When i watch the movie now as an adult I still get the same excitement and I laugh just as hard maybe more. I love the old fire hall that they film in. Who doesn’t know who to call? Pretty sure we all know what ectoplasma is! The pain in the butt Slimer is such a great comedic release that the movie needed.

Another gem from the 80’s, pretty sure my mom took us to the theater for this one but I was always falling asleep during movies so she stopped taking me. I remember this moving scaring me as a kid and it’s on my “to watch” list as it’s been years since I’ve seen it. It was such a well put together story and it had great music that as a kid I had no idea what was going on. I didn’t grasp the real meaning behind the story until I was an adult, I just loved the stories and the goblins.

This is the first movie that I went to the theater to see that I didn’t fall asleep during, it’s got so much meaning for me for a lot of reasons. If you haven’t seen this movie…wow, I don’t know you! It’s really good Micheal Keaton nails the character of Beetlejuice. The movie did scare me a bit as a child however that seems to be the norm for movies I saw in the 80’s, there are no Disney movies on my list for a reason. One of my favourite performances of Catherine O’Hare who really hasn’t aged much since this movie came out! Beetlejuice, Beetlejuice, BEETLEJUICE!

I was never lucky enough to see this in theaters, I actually didn’t see this movie until I was an adult some years ago. Ever since the first time I have seen it, if it’s on TV I will watch it (or the rest of it). Not all the acting is that great but Robin Williams, Dustin Hoffman, Bob Hoskins, and Arthur Malet really carry the movie for me. I really enjoy movies that are a good mix of comedy and drama (guess they call them dramedies now) that are just slightly different. I love movies that I can get lost in that make me feel as if I could belong in their make belief world. Hook is one of the few to do that for me, I hope Robin Williams has found his Neverland and peace. This movie has a great lesson to learn.

Here is movie that I don’t own on blue-ray yet but I have seen the most of any movie I have ever watched. I have made time to watch this when I know it’s coming on TV or I get upset when I find it half-way through and I just have to finish watching it. I don’t think I can say anything bad about this movie, it’s funny, it’s got lots of action. I’m normally not a fan of either Stallone or Snipes but I can’t NOT like them in this movie they both do an amazing job. Denis Leary giving the speech in the underground has to be one of the best movie speeches ever! I love that Glenn Shadix who also played in Beetlejuice plays a similar character. Most people would call BS on this or “tight casting” but i like it, it’s not the exact character but they do remind me of each other. I also have NO idea how the 3 sea shells work…. 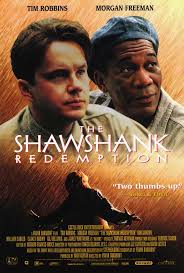 The Shawshank Redemption // Released in 1994

The first time I saw this movie was in grade 10 or grade 11 history class where I watched a lot of good movies that are in my top 20 list! The movie is set in the 40’s but the themes of the movie transcend time. As with most movies on this list I have a different experiencing watching this movie as an adult, I can relate more to the characters even though they are inmates. I would never be able to guess what would have happened so when the guard throws rocks around Andy’s cell and comes across his secret I was delighted. I do not think in real life prisoners should attempt to escape, just saying!

Tim Robbins was having a good few years in the late 90’s and this movie is NO exception. The first time I watched this movie I laughed so hard I cried, I would have to say this movie might be my favourite comedy of all time. When Nick (Tim’s character) gets car jacked by T. Paul (Martin Lawrence character) the movie just gets crazier from there. If you haven’t seen it please check it out. The wardrobe is a little dated but the comedy is not, a great movie that is always on my “to watch” list! 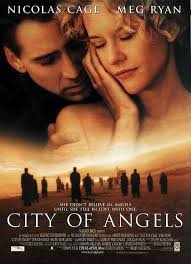 This is one of the first movies that I cried after watching it. The movie itself is so good, great writing, great acting, but it’s so sad! The connection shared by Nicolas Cage and Meg Ryan is powerful and pulled me in right from the start. The character of Nathaniel Messinger played by Dennis Franz adds a lightness that the movie does needs. I think for me this movie had me thinking about all the loved ones that I had known that had passed away and hope that maybe they are happy where or whenever they are.

I know that there have been previous movie adaptations of this play but this version is the best as far as I’m concerned. When I saw this movie version for the first time I had no idea who Gerard Butler was but I instantly became a huge fan and have since watched almost all of his films. I have seen the play multiple times before seeing this movie and when I heard it was coming out my sister and I got very excited. I know pretty much all the words to the whole play and can never stop myself from singing along. I have never hidden the fact that I identify most with the character of the Phantom and a lot of the speeches he says are feelings that echo in me. The line “…the world showed no compassion to me” has been a line I have thought many of times, but unlike the Phantom I do have loved ones, I was born in a century where I don’t have to hide or be in a Freak Show but I worry what would have happened if I was born in the 20’s, or 30’s. If you are a fan of the play but haven’t yet seen this movie version, please do see it. 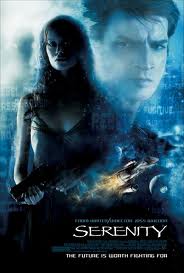 Some of you might say that I have saved the best for last…i might not disagree with you but it just worked out that this is the youngest movie on the list. Anyone who knows about the poor show Firefly will know how big of a deal this movie is! It really did help with closure even though we lose someone…DAMN YOU Joss Whedon! It’s just such a great cast and the ideas behind both the series and the movie may not be far off about how we may end up in the future as we grow globally.

Well there you have it folks my top 10 list. It wasn’t really hard to narrow it down but was hard just to stop at 10 as there are still some really great movies out there! Time for me hear about your top 10 leave a comment below.