Today I had the amazing opportunity to participate in something I had never heard of before.  I was asked to be part of a living library, I was book #7.

The event took place at Lucknow Central Elementary Public School in Lucknow Ontario about 1.5 hours away from where I live. It’s a great small community that has a mixture of farm folks and suburban peeps. My good friend Monica was my companion for the day and we had a nice drive. I love the fact that there is still so much green around, there were farms and not a lot of anything during the drive and it was really nice. I like getting out of the city as much as I can it’s just so pretty out in this world!

I revived an email a few weeks ago from my volunteer coordinator that said “see below” and below was a request from the Educational Assistant asking me to participate in this idea of a living library. I jumped at the opportunity since the idea of educating kids is such a big deal for me. I had no idea what to expect and when with an open mind and empty stomach since lunch was being provided 🙂

The idea of a living library is to create a conversation amoungst a group of people so that we may learn more about the people around us in turn this promotes diversity and reduces prejudice.  The living books are typically from all walks of life, from different cultural backgrounds, wide range of ages, and life experiences and vary in their careers.

The way that ours was set up was that each “book” was at a table and table were located all over the school and groups of kids would come and “borrow” us. Before the even the kids were given a description of each “book” and asked to sign up to 8 out of 13 but they were only scheduled for 6 of us. Each period which lasted about 30 mins they came over and each of us “books” talked to them.  I started with telling them a bit about me in the hopes that it would spear them to ask questions.  Some students came ready with questions and some kids just winged it. The kids were great they were accepting and I sensed no hostility from them at all. At some points with was hard since most of the kids seemed really shy they didn’t have a lot of questions and in most of the 6 groups it turned out that I was engaging them and asking them questions. I tried to be informative about what it’s like being different asking them if they had been victims of bullying or seen it happen and all had either been or seen it.  I’m not sure how I was received but I’m sure i will hear both positive and negative (if any) feedback in the coming days. I had sometimes to remember my audience since I am not around young adults everyday I treat them the same as I would my peers and had to remember to keep my filter in place so that I didn’t say anything that they probably shouldn’t hear. I can be negative sometimes and I’m glad I had Monica there who was an amazing help to keep me on track bring up things that were good ideas of things to talk about but also to talk to the kids about herself as well.

The other “books” were a wide range of people there was a nurse, a DJ, a recovering alcoholic and drug addict (who is 9 years sober), Automotive repairman, Salon owner, a mother of an adult with developmental disability, Funeral director, owner of an auto wreckers company, Fitness instructor, a pharmacist, and an openly gay man. I got to meet some of them which was great.

Monica and I asked the kids if they thought the experience was valuable or if it was another one of those school activities that we all dreaded in school but they were really receptive of the experience. They really enjoyed getting to meet different people who had a story to share they said that since they live in such a small town they don’t get exposed to as much diversity they don’t get to see what the world is like beyond their town.

For lunch there was homemade lasagna, salad, fresh baked bread (still warm, yummy), and homemade brownies for dessert which were fantastic!! A great day had by all I would say! 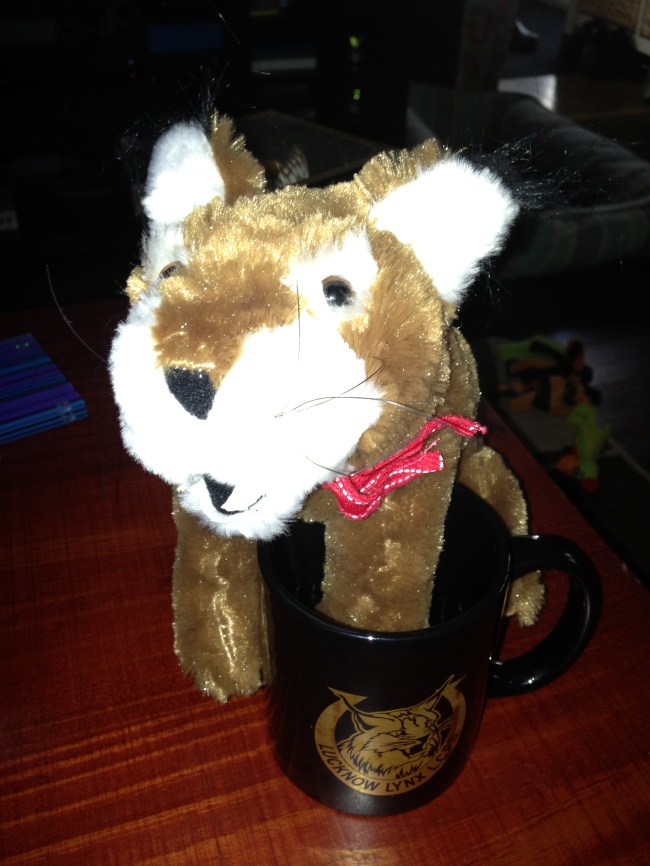 On my way out the door I got this as a gift. A cute stuffed lynx and an awesome mug!!

I interrupted my regularly scheduled work week to participate in Tim Horton’s annual Camp Day. My mom works at a local store and every year I choose to skip out on my work day and hang out with her and help raise some money.

Tim Horton’s Children’s Foundation provides an amazing opportunity for kids to attend one of their camps free of charge. Children are picked right from the communities where Tim Horton’s are located the children are. The children are selected by a Community Agency or school working with the local Tim Horton’s Restaurant Owners, or they are invited by the Foundation to apply.

There are 6 camps and all do residential and year long programs. The residential programs allow kids to come for 10 days in the summer or something pretty neat they have a stay during March break. The activities are clearly designed to fit the season, in summer they have they typical camp type activities like archery, canoeing, and creative arts but also they have high and low adventure courses which challenge the kids and helps them develop skills that they may not have been able to do so while in their home environment. The winter camp program offers children the opportunity to try dog sledding, skating, and snow tubing. Now as anyone who knows me will tell you I HATE the cold but I would love to go to winter camp and do all of those things!!

Camp Day is a once a year fund raising event where all proceeds from their coffee sales goes directly to the foundation. Almost all stores also hold fun activities to help raise even more money. This year was a bit quite for my mom’s store in terms of activities, we had a BBQ which was donated and graciously ran by our local Pillars company (see pic), we had a games table and a partial car wash. At the games table people could donate $2 and either spin to win a prize or they could choose a sucker which was specially marked to win a prize. Some of the staff were also outside and washed customer’s windshields while they waited in the drive-thru line. To help raise more money I also knitted some dishcloths and sold them for $2 each.

Besides myself who was their volunteering the store also brought in local police officer and a couple firemen to serve coffee. Since I used to work for Tim Horton’s I manned the games table all day and avoided what might have felt like work! 🙂

To everyone who came out to donate and support an amazing cause THANK YOU! In case you couldn’t get out and buy a coffee you can donate by going to Tim Horton’s website http://www.timhortons.com/ca/en/difference/childrens-foundation.html. If you live in Canada or the US you can donate $5 by texting the word CAMP to 45678 (Canadian residents) or 41518 (US residents). If you are moved and live outside Canada or the US on the website there is a link to “donate now” and you would be able to make a one time donation though credit card or a little birdy told me PayPal is also accepted however I’m not 100% sure.

I love supporting Camp Day because I believe that camp is a great experience for all kids. I was lucky enough to be able to go to camp 2 years in a row and had a lot of fun because my sister was with me. I don’t remember playing a lot with the other kids so it was a typical everyday experience for me that way but I have no truly negative feelings towards it. I remember getting up and it was always cold in the morning when we would make a mad dash to the dinning hall for breakfast. I also remember having some spending money to buy something at the tuck shop. What were your experiences at camp? 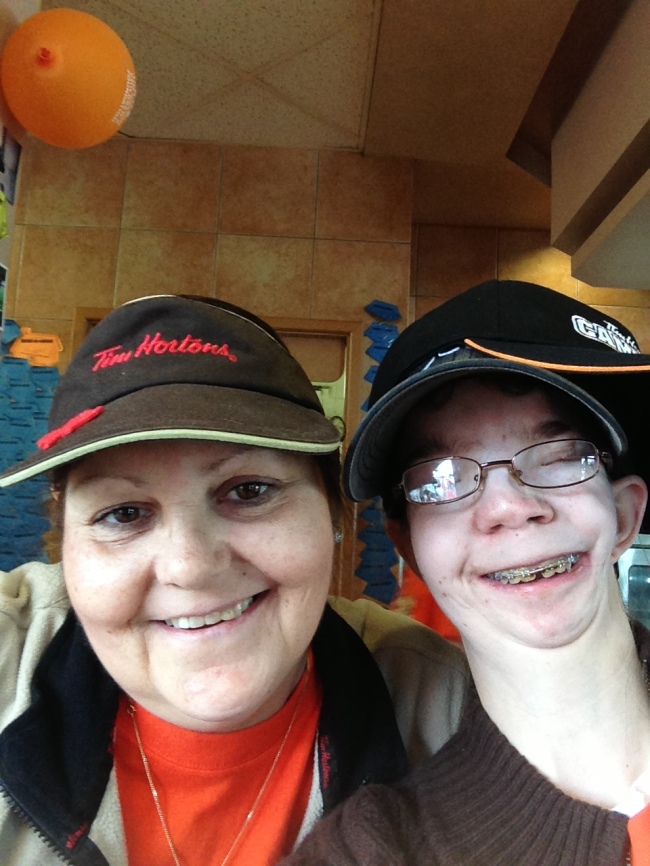 my mom and I

me and another volunteer. He is a fire fighter….I forget his name. 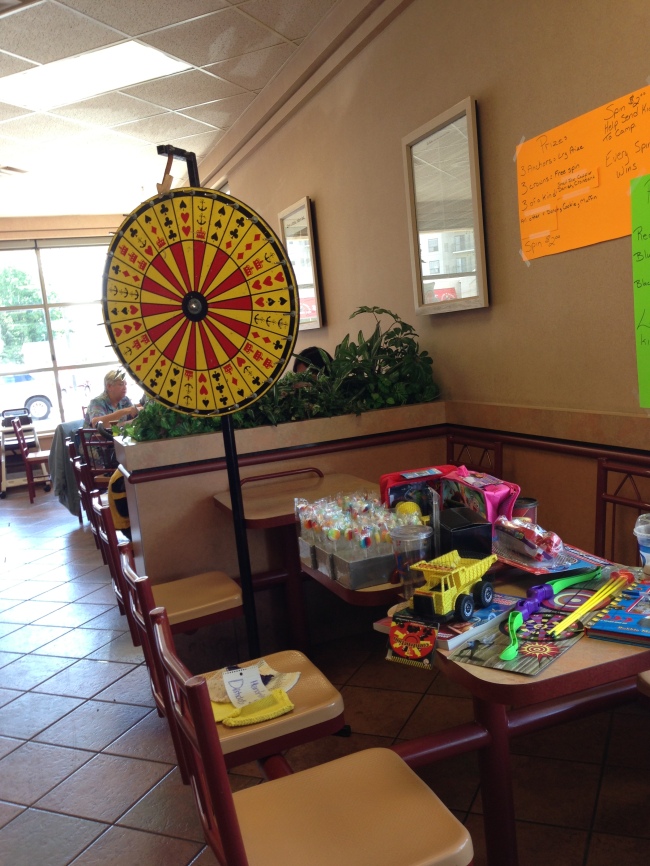 Everyone having fun yet!! At the drive-thru

BBQ!! This was them just as they were setting up.

I should also mention that one year when I was working I dared my co-workers to raise $1000 and I would shave my head. We had always raised a good amount of money but never this much so I thought meh, I’m safe….yeah took them all of I think 24 hours to do it! So our manager joined the challenge and asked them to raise $5000 and she would also shave her head….yep on camp day we both had nice short REALLY short hair dos.. and before you ask NO I don’t have any pictures, I didn’t think I looked that great with no hair and unless that same store (you all know who you are) raise something like $10, 000 i would volunteer to do that again.