It’s not like I don’t understand why this is.  When you are casting for a role you are looking for something specific and people without a facial difference can be “anybody” meaning there needs to be no explanation as to why they look the way they do. If the actor’s hair is blonde it can be dyed, If the actor needs glasses they don’t have to wear them for the role. With someone with a facial difference there isn’t that choice unless you hire a make-up artist and spend ooodles (yes I just said ooodles) of money to transform that person you are left fitting that individual to that role or vice versa. Knowing this doesn’t make it easier. I grew up envious of people in wheelchairs because they were featured on TV and in a lot of cases there was no explanation needed it was just the actor playing a role.

The first time I could identify with a role was the first time I went to Toronto to see a play called “Phantom Of The Opera”. To be honest the first time it didn’t clue in we were far in the back and I was lulled by the music and the production value. They did a really great job. I have seen that play a total of 3 times in Toronto and each time it resonated with me.  If you haven’t seen or heard of the “Phantom of The Opera” first off where have you been?? and secondly here is a link to Wikipedia I would cut and paste but it’s a long description and better then anything I could write.

It really wasn’t until the most recent movie version came out (2004) that I could identify with it. Don’t get me wrong I LOVE the theater production and would see it any night of the week but the movie version was so well done and I could hear all the words and see how it flowed that solidified it as my favourite theater production/movie.  I had never heard of Gerald Butler or Emmy Rossum but now I would watch anything they were in.  The part that gets me every time, is near the end of the movie where the Phantom has lured Christine to his “lair” down under the streets on London and while they are talking Christine’s suitor comes a young man named Raoul and during the scene they are exchanging words at one point Christine says “Have you no compassion” the Phantom counters with “The world showed no compassion to me”…. That one line said in that manner I can’t tell you what that feels like.

We watch movies as an escape but sometimes there are movies that are made specifically to invoke an emotion whether it be anger, sadness, or a sense of belonging. This movie rang with so many truths for me that it’s hard to say one bad thing about it. I will forever love Gerald Butler for his portrayal of The Phantom the heart he brings is a testament to his skill as an actor. 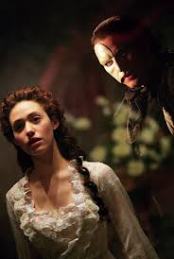